The latest release from Campus Craft Brewery – a partnership between UW–Madison’s Department of Food Science and Wisconsin Brewing Company (WBC) now four years in the running – is a classic German-style lager mixed with a Wisconsin-made grapefruit soda. It is made in the radler style, often called a shandy.

“RE: FRESH Radler” was the result of 10 food science students doing testing and evaluation with WBC to refine the formulations for the base beer and final mixture. A celebration of their collaborative beer will be held at 3 p.m. on Saturday, May 5, 2018, at WBC’s brewery in Verona. The event will feature a brewery open house, live music, and remarks from CALS Dean Kate VandenBosch and WBC Brewmaster Kirby Nelson.

The beer, which is intended to be an easy-drinking beverage at 3.2 percent ABV, is already available on draft or in 16-ounce cans at the brewery, Miller Park, and many other retailers and establishments carrying WBC products.

Past releases from Campus Craft Brewery have included an American pale ale, an American wheat ale, and a red lager. Those products were developed as part of a student team competition, with brewing industry leaders judging their entries. There was no competition this year. Instead, students enrolled in an independent study to work together alongside WBC personnel to perfect the product. This year’s students, all food science majors, were:

Radlers and shandies have German and British origins, respectively. In Britain, “shandygaffs” (beer mixed with ginger ale or ginger beer) date to the 19th century. The “radler” (German for “cyclist”) is fabled to have been created in the 1920s by innkeeper Franz Kugler who resorted to cutting his beer with lemonade to avoid running dry when thousands of cyclists descended on his inn at once. 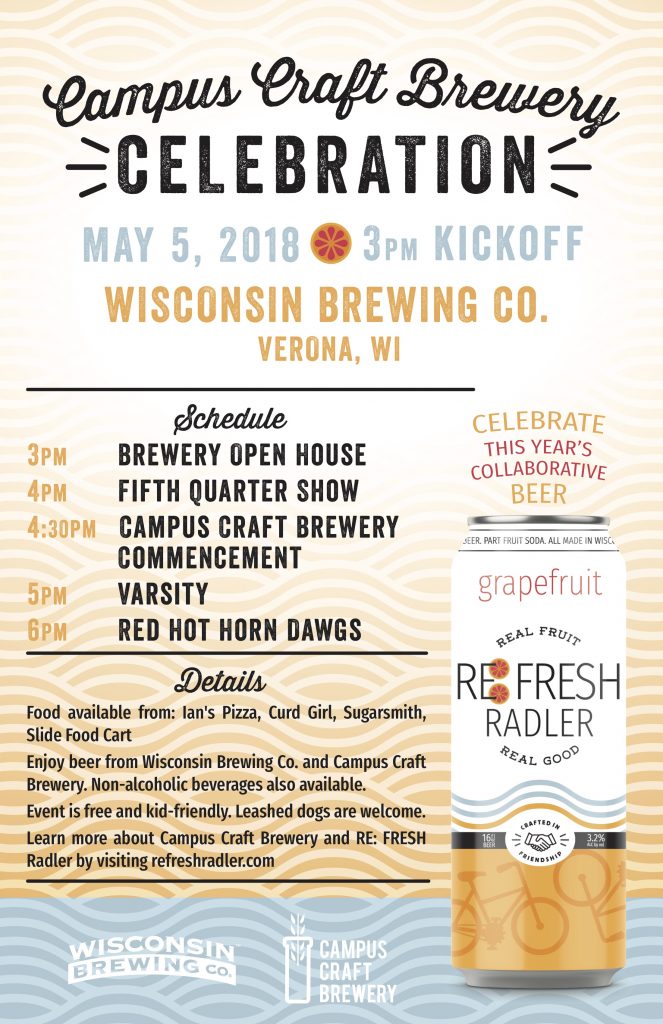