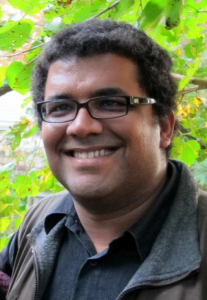 Vatsan Raman, a CALS assistant professor of biochemistry, is one of two University of Wisconsin-Madison scientists selected to receive a 2016 Shaw Scientist Award from the Greater Milwaukee Foundation.

For more than 30 years, the Shaw Scientist Program has supported early career investigators pursuing promising ideas in biochemistry, biological sciences and cancer research. The award comes with $200,000 in seed funding.

“Research is a long-term investment in our quality of life, which is why the Shaw Scientist Program aligns so perfectly with the Greater Milwaukee Foundation’s mission,” says Ellen Gilligan, the foundation’s president and CEO. “The foundation has been supporting quality of life initiatives in our community for more than 100 years, and together with our donors, we are committed to investing in the future health of our region.”

Raman hopes to unravel the molecular mystery behind allostery, a property that allows proteins to change shape by sensing and responding to signals inside a cell.

“The Shaw Scientist Award funds give me the freedom to pursue a high-risk, high-reward project,” says Raman, who earned his doctorate at the University of Washington in 2009, with postdoctoral training at Harvard Medical School. “The preliminary results will strengthen my grant application for continued federal funding of this research.”

The Shaw Scientist Awards started in 1982 thanks to a $4.3 million bequest from Dorothy Shaw, widow of James Shaw, a prominent Milwaukee attorney. In addition to $2 million in special grants, Shaw fund has awarded more than $13 million in grants to 71 scientists from UW-Madison and UW-Milwaukee during the past three decades. An advisory panel with scientists representing major U.S. research institutions selects the winners.

The awards are administered by the Greater Milwaukee Foundation, a family of more than 1,200 individual charitable funds created by donors to serve the local charitable causes of their choice. Started in 1915, the foundation is one of the oldest and largest community foundations in the world.