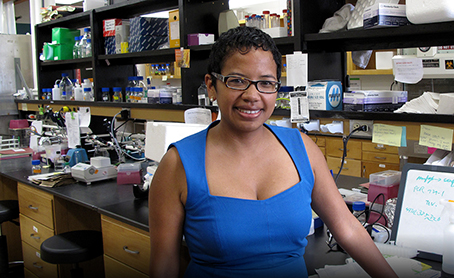 Aurelie Rakotondrafara had packed for the tropics. So when a clerk at the Fulbright fellowship office asked if she was ready for winter, her face fell. She thought she was heading to a Ph.D. program in Hawaii.

“Not Hawaii,” corrected the clerk. “Iowa.”

Rakotondrafara can laugh about it now. After a few years globetrotting, the young plant virologist is making Madison home. Her journey here crisscrossed four hemispheres, from a childhood in Madagascar to the cornfields of Ames to postdoctoral research in a cutting-edge European laboratory.

Her work has already made a splash. In 2014 she and a collaborator won a WARF Innovation Award for discovering a unique sequence in a wheat virus that allows it to leapfrog genetic dogma.

“We typically say that one mRNA equals one protein,” she explains. “That’s not the case here. We will be able to express several proteins from the same RNA.”

That is because Triticum mosaic virus contains a special genetic sequence called an internal ribosome entry site (IRES) that enables it to express its single large polyprotein much more efficiently. An IRES allows translation to jump to the middle of an mRNA strand and initiate at any internal position. In most organisms the process usually starts at the front.

“Viruses are so smart at making protein,” she says. “The question is how do we use their strategy to our advantage?”

IRESes obtained from animal viruses are in widespread use for commercial and experimental protein production. However, this one is the first to function well in plant systems and may be a hundred times more potent than its competitors.

The power to express multiple genes at the same time, or stack traits, may yield new and improved biofuel crops and chemicals. The discovery could change how biopharmaceuticals are made, such as the antibody cocktail currently produced in tobacco plants to treat Ebola patients.

While Rakotondrafara admits this work is her favorite (“translation regulation is what I love”), she’s taking on applied projects aimed at crop health and productivity.

She describes a dilemma: the majority of the potato cultivars favored by farmers in Wisconsin and elsewhere are highly susceptible to a virus called PVY that can sometimes cause ugly dark rings. When leaves begin to show an off-color ‘mosaic’ pattern, farmers know the virus has invaded their field and can take action.

But a recent strain is more insidious – infected plants don’t exhibit symptoms until it’s too late.

“The crop may look healthy aboveground,” says Rakotondrafara. “But when it comes to harvest time, all of the tubers are dead.”

There is hope. Rakotondrafara and her colleagues are looking to genetically engineer potatoes that resist the virus. The new potatoes won’t contain any foreign DNA but rather will overexpress a naturally occurring gene with several amino acid mutations.

The project is funded by the Wisconsin Potato and Vegetable Growers Association.

“What’s cool is that we’re being supported by the farmers,” she says. “No, it’s not big money. But they see the potential. Even if it is years down the road.”

She says the new potatoes wouldn’t have to be sold commercially. Rather, they could be used as a buffer to surround and protect the non-modified crop from disease-carrying aphids.

“The first transgenic potato that hit the market several years ago went down the drain,” she says. “I understand the growers’ concerns about so-called Frankenstein genes and public rejection.”

She understands history too. Rakotondrafara admits feeling intimidated when a position opened up in the UW–Madison plant pathology department four years ago. She was working in a lab in Germany at the time and hesitated to apply.

After all, Madison researchers were the first in the world to successfully transfer plant DNA; the first to grow tobacco from a single cell; the first to discover the cause of maple blight, oak wilt and cranberry black rot. The department helped transform alfalfa into a billion dollar crop and make Wisconsin cabbage a global staple.

“It was here the first resistance gene against Phytophthora infestans was discovered,” notes Rakotondrafara. “That is the pathogen that caused the Irish potato famine in the 1840s that killed a million people and resulted in a massive migration to the U.S.”

Legacy is a heavy mantle. Was she ready for the challenge?

No doubt about it. Standing in her lab overlooking Lake Mendota, Rakotondrafara recalls a childhood of big dreams, of hearing about locust outbreaks and starving people.

“I wanted to save the world,” she smiles.

This story was originally published on the WARF website.