Ray Guries, emeritus professor in the UW–Madison Department of Forest and Wildlife Ecology, is the newest member of the Wisconsin Forestry Hall of Fame. His induction took place on Sept. 12, 2018 during a ceremony at the Wisconsin Society of American Foresters (SAF) annual meeting in Rothschild, Wisconsin.

The Wisconsin Forestry Hall of Fame was founded in 1984 by a group of public and private forestry organizations to recognize individuals who have contributed significantly to the practice and progress of forestry in Wisconsin. The honor recognizes Guries’ substantial contributions to teaching, student advising and research in forest genetics and tree breeding over the course of his career.

Guries’ research program included managing the Wisconsin Tree Improvement Program in concert with the Wisconsin Department of Natural Resources (WDNR) to ensure the state’s tree planting program used the best adapted and most productive seed available. Results of his work with red pine, jack pine, eastern white pine, black walnut and other species have been published in regional tree improvement conference proceedings and have formed the basis for current progeny tests and seed orchard development in Wisconsin.

Guries is also respected for his work on the selection and breeding of Dutch elm disease (DED) resistant elms. The elm breeding program at UW­–Madison was initiated in 1957 by the late Eugene Smalley and then grew significantly with Guries’ arrival, with many acres of new elm trials established in the 1980s and 1990s. Work expanded to include new elm species, and several plant patents were issued for DED-resistant elms. Interest in the DED program spread to Europe, where several of Guries’ DED-resistant selections are marketed in Germany, the Netherlands and the UK. Closer to home, the “New Horizon” elm, one of Smalley and Guries’ DED selections, is among the most popular and commonly planted boulevard trees in Wisconsin where it can be found in virtually every city and village.

In addition to his research, Guries was always deeply engaged in forestry education, including formal instruction for UW–Madison students as well as presentations at various public outreach events. For many years, Guries’ led a twice-yearly, large-enrollment course for undergraduates, as well as teaching or co-teaching several graduate-level courses. He was also involved in leading a biennial 2,000 mile, 10-day field trip for students to visit forest industries in Mississippi, Arkansas, Alabama and Florida.

Over the course of his 34 years with the UW–Madison, Guries served as an academic advisor for hundreds of students, including many beyond his assigned student advising load. He was the faculty advisor for the Forestry Club, UW-Madison’s student chapter of the SAF. When interacting with undergraduates, he went above and beyond, offering advice on college courses needed to graduate, as well as broader topics such as summer jobs and internships to build a student’s resume.

“His counsel and desire to create opportunities for students had no limits. He always gave his time freely to help a student succeed,” says Brian Beisel, who received his forestry degree in 1981.

Guries also served as major advisor to 35 master’s students and 13 doctoral candidates, and served on mentoring committees for an additional 200 graduate students pursuing a variety of science degrees. Many of these freshly-minted scientists went on to work in the forestry field.

Guries also took on various leadership roles, including chair of his department (2002-2009) and interim vice-dean and associate dean for research for the UW–Madison College of Agricultural and Life Sciences (CALS) (2009-2011). He is a long-time member of several forestry and conservation associations, including SAF, Forest Steward’s Guild, Wisconsin Arborist Association and the Metropolitan Tree Improvement Alliance.

His teaching and research have been recognized over the years with various awards, including the Spitzer Excellence in Teaching Award from CALS; the Chancellor’s Distinguished Teaching Award from UW–Madison; the Carl Alwin Schenck Award for Outstanding Performance in Forestry Education from the SAF; the WDNR Friend of Forestry Award; and the Lifetime Achievement Award from the Wisconsin Urban Forestry Council.

“Ray is remarkable for his commitment to teaching and advising,” says Scott Bowe, a fellow professor of forest and wildlife ecology. “The same can be said about his commitment to faculty and staff, and his years of service to the UW. This is a well-deserved honor.”

The Wisconsin Forestry Hall of Fame exhibit is located at UW–Stevens Point in the College of Natural Resources Building. It is open for viewing during school hours. Previous inductees from UW–Madison include Aldo Leopold (game management,1999) and John Kotar (forestry, 2010).

Professor Ray Guries made substantial contributions to the forestry profession through his teaching, student advising, and research. Ray’s expertise in forest genetics and tree breeding helped guide the Wisconsin Forest Tree Improvement Program for many years. Many of Ray’s former students went on to become leaders in forest conservation and management, thereby perpetuating his legacy as a mentor and a scholar.

Gail Smith, one of Gurie’s former students, wrote the following poem about him: 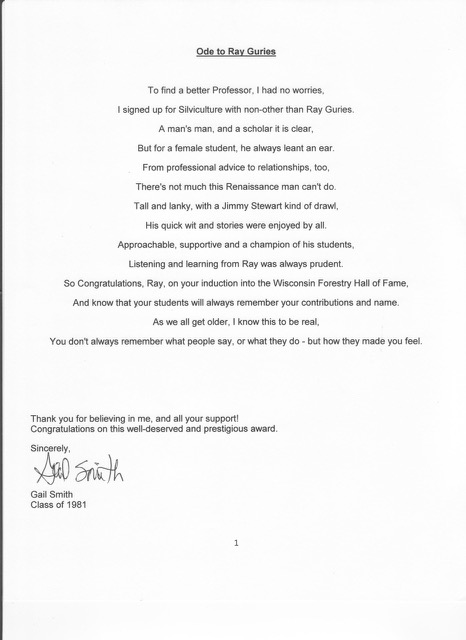