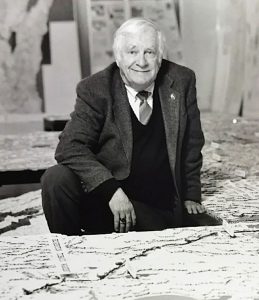 Philip Howard “Phil” Lewis Jr. passed away on Sunday, July 2, 2017 at the age of 91. Lewis served as chair of the UW-Madison Department of Landscape Architecture from 1964 to 1972 and taught undergraduate and graduate design courses.

Lewis received a bachelor’s degree in landscape architecture from the University of Illinois in 1950, then completed a summer internship with the National Park Service. He was awarded a Charles Eliot Traveling Fellowship in Landscape Architecture for his work on the Everglades. The fellowship allowed Lewis and his new wife to travel to Europe for a year-long honeymoon and period of discovery. They viewed the landscapes of England, Scotland, Spain, Italy, Switzerland, Germany, Denmark, Sweden and Norway. These experiences sparked Lewis’s interest in museums, communicating with the public and the creation of spaces for buying local products.

After returning from Europe, Lewis was recruited by Wisconsin Governor Gaylord Nelson to serve as the Director of the State of Wisconsin Recreation Resource, Research and Design, Department of Resource Development, where he served from 1963 to 1965. Environmental corridors were again identified in the Wisconsin State Recreation Plan to help guide planning decisions and public land purchases in the state.

Lewis became the founder and director of the Environmental Awareness Center (EAC), part of the School of Natural Resources and the College of Agricultural and Life Sciences. He had joint appointments with the Department of Landscape Architecture, Department of Urban & Regional Planning and the University of Wisconsin-Extension. Lewis also served as chair of the UW-Madison Landscape Architecture Department from 1964 to 1972 and taught undergraduate and graduate design courses. Shortly before his retirement in 1995 he served as the Jens Jensen Professor of Landscape Architecture. Lewis was also a visiting professor in the School of Design at Harvard University from 1976 to 1977.

Lewis contributed to the origins of geographic information systems technology with his concept of using transparent overlays of mapped resource qualities for environmental planning. The Environmental Systems Research Institute (Esri) presented Lewis with its Lifetime Achievement Award in 2000. Lewis, along with Ian McHarg and Angus Hills, are credited with the development of the natural resource inventory approach and map overlays as a crucial part of the regional design process. His work and concepts are outlined in his book; Tomorrow by Design, A Regional Design Process for Sustainability, written in 1996. Lewis celebrated his retirement from UW-Madison at a banquet on April 22, 1995.

On Sept. 12, 2013, the Dane County, Wisconsin Board of Supervisors dedicated a Madison Environmental Corridor System to Phil and Elizabeth Lewis, now known as the Lewis Nine Springs E-Way. The title recognizes the work of Phil and his wife, Elizabeth (Libby), who served for 26 years on the Dane County Parks Commission.

For more about Lewis’s life, please read his obituary on madison.com.