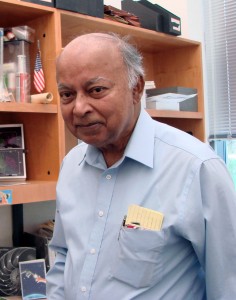 Bibhuti “Don” Ranjan DasGupta, who worked as a scientist at the Food Research Institute for over two decades, died peacefully at home on June 1, 2015. He was born in Kolkata, India, to Profulla Ranjan and Renuka DasGupta on May 3, 1934.

He came to UW–Madison in 1970 and spent 26 years at the FRI as a successful researcher and grant writer. He spent his academic life studying the mechanism and structure of botulinum toxin and was known internationally as an authority on the subject. In 1989, he won the prestigious national Javit Neuroscience Investigator Award.

A full obituary is posted here.